Watership Down: The Soundtrack 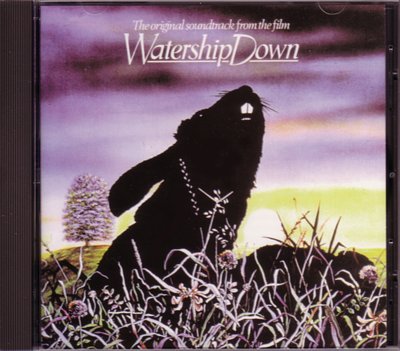 In 1978, the year of the film's release, a soundtrack LP(or record)was released, eventually going out of print.  Twenty years later, in 1998, a CD was finally released, only to go out of print soon after.  This was what I discovered when, having developed a keen fondness for the film's score, I searched the internet way back in 2005 to find if there was an available CD.  Nevertheless, I was determined to find it somewhere, and after a lot of searching, I found a site that carried it, mint condition, in shrink wrap.  The truly exhilarating experience of owning the CD far surpassed any hesitation I had over its price.

For those who don't have the score, yet love the film, I encourage you to seek out the soundtrack, however you can.  Good places to go are Ebay.com, and Amazon.com, where new and sealed copies occasionally appear.  If you're not picky about the format, and you happen to have a record player, the record itself can often be found at a very reasonable, discounted price: also, it is very easy nowadays to have records transferred to CD. (In 2016, a hybrid SACD of it was released, remastered, though I haven't personally heard it yet).

All of the main themes from the movie can be found on the score, although the tracks don't necessarily follow their order as heard in the movie.  This is no hindrance to the enjoyment of the music itself however, which includes such cues as the main theme, Kehaar's theme, and the haunting and mysterious "Bright Eyes", which to me is by far the most beautiful song ever set to animation. A little trivia: the track entitled "Climbing the Down", does not actually come from that sequence in the film. While the beginning music is similar, in being the main film theme, it actually is derived from the ending scene of the movie(I won't spoil it for those who haven't seen it).

In the paragraph below, I've written the lyrics to "Bright Eyes", that is, the single from 1978.  Although it isn't on the CD, the single can easily be obtained from various other sources.  One thing to take note of is that the song, as heard in the film, only begins from the second 'stanza' in the first verse, and does not include the second verse after the chorus.  The version on the CD is similar to the film version, except that it begins from the first stanza of the first verse(after the chorus following the first verse, there is a musical interlude, which is in turn followed by a repetition of the chorus before the song ends).

Is it a kind of dream,
Floating out on the tide,
Following the river of death downstream?
Oh, is it a dream?

There's a fog along the horizon,
A strange glow in the sky.
And nobody seems to know where you go.
And what does it mean?
Oh, is it a dream?

Is it a kind of shadow,
Reaching into the night,
Wandering over the hills unseen?
Or is it a dream?

There's a high wind in the trees,
A cold sound in the air.
And nobody ever knows when you go.
And where do you start,
Oh, into the dark?