El-ahrairah vs. The Black Rabbit

For years, fans of Watership Down have debated the death of Hazel in the final chapter: is it El-ahrairah, or the Black Rabbit who comes to take Hazel away?  The argument for the Black Rabbit, say some, is that El-ahrairah has no special powers, he was simply one of the first rabbits and became a legendary hero, but nothing more.

However, I am one who strongly believes that it was in fact El-ahrairah who escorts Hazel, not the Black Rabbit.  My reasoning for this eludes to clues that are scattered throughout the book.

One example that suggests El-ahrairah is more than an ordinary rabbit can be found on page 83, before Hazel and his rabbits enter Cowslip's warren:

"O El-ahrairah," thought Hazel.  "These are rabbits we're going to meet.  You know them as well as you know us.  Let it be the right thing that I'm doing."

And on page 436, note Hazel's words before he goes to fulfill his plan for saving the warren from General Woundwort:

"As soon as we've gone," said Hazel, turning to Bigwig, "you're to block this run and get everyone back behind the wall you've made.  If they break in, hold them up as long as you can.  Don't give in to them on any account.  El-ahrairah has shown me what to do."

Hazel would not have said these things if El-ahrairah was a normal rabbit.  However, the biggest clue lies in the Lapine tale El-ahrairah and the Black Rabbit of Inlé:

(Spoken by Lord Frith after El-ahrairah returns from his journey): "But, speaking of gifts, I have brought a few trifles for you.  A pair of ears, a tail and some whiskers.  You may find the ears slightly strange at first.  I put a little starlight in them, but it is really quite faint: not enough, I am sure, to give away a clever thief like you."

Lo and behold, El-ahrairah's starlight ears are mentioned in Epilogue:

"Yes, of course," said Hazel, hoping he would be able to remember his name in a moment.  Then he saw that in the darkness of the burrow the stranger's ears were shining with a faint silver light."

Last, but not least, the Watership Down Film Picture Book(its captions written by Richard Adams), describes the rabbit as El-ahrairah: 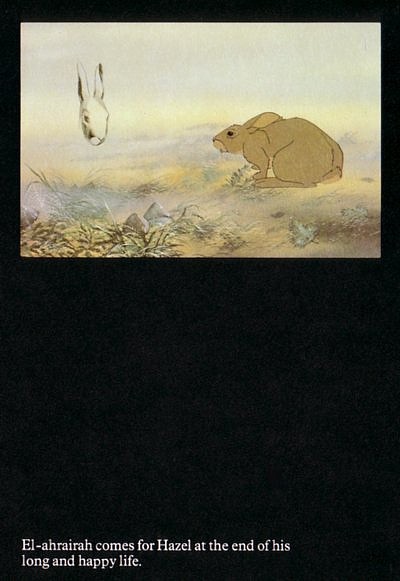 Even though it is the Black Rabbit in the movie, it's highly unlikely that Richard Adams would make a mistake with his own character.  Therefore, it should be concluded without a doubt that El-ahrairah is the mysterious stranger on the final page of Watership Down.